← On the Focus of Weekly Gatherings
Light in the Pit → 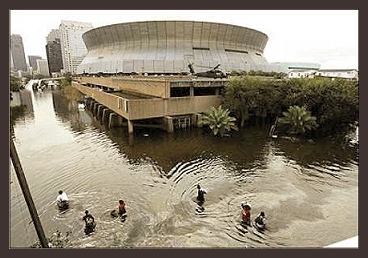 Six years ago, my oldest daughter was only almost ten years old and my youngest barely over two. We lived in Natchez for a few months while the world settled its focus on a post-Katrina environment of chaos and purposed aid.  It seems like much longer.

From the crusted-mud pavements of flooded streets emerged Homeland Missions, a community relief organization based out of our church in Slidell. We were instantly catapulted into unfamiliar roles and unique opportunities to live out what we’d been teaching and preaching for over a decade. It was both a horror and a privilege, the kind of orchestrated dance that only God could have composed in His mercy, grace and unsearchable wisdom for He always knows what we need and when we need it.  I’m reminded of the crucifixion of  our LORD where both realities were juxtaposed in prime view. The greatest horrific crime perpetrated simultaneously with the greatest act of love ever. I’m still floored by the expanse of it all.

Much spiritual growth has happened since that monstrous hurricane came beating us out of our comfort chairs for a mad sprint northward.  Through the  marsh-grass mounds, house muck,  failed promises and sacrificial gifts came new wisdom – an insight into faith-filled perceptions that let us know that  we’re better off for having been shaken to the core.  Sometimes you need a trip to the woodshed to discipline your focus. Sometimes you need to lose what you were taking for granted in order to know what you actually had – a Big Yellow Taxi moment is a powerful teacher. Katrina filled the bill.

Increased faith, more patience, greater grace and an acute sense of our need for others are our fruit stands – evidences of God’s handiwork in molding our hearts towards Christ.  These six years have gone by slowly like the methodical churning of an overburdened dough hook longing to complete the next batch, yet it isn’t over.  Much is left undone and in reality will never get done. Interest is almost nonexistent, funding has evaporated and the bureaucratic overload is so high one is hard-pressed to even see beyond the immediate. However, we press on.

Through many challenges and setbacks, our community work continues as we are able and we  pray that the LORD will continue to use us as He sees fit.  It took a mighty storm to mobilize us from a status-quo congregation into an outwardly-minded fellowship. In between that mobilization has come a greater awareness of His providential provision as well as man’s great need of the Good News. May the next six years bring even more people to the same praise through the Spirit-empowered efforts of our labors and through the help of others just like you. Soli Deo Gloria.  Amen.

Pastoral sojourner in the world. Raising up four daughters. Citizen of earth. Resident of heaven. Taking ten looks at Christ.
View all posts by ostrakinos »

← On the Focus of Weekly Gatherings
Light in the Pit →